Find Something Want To Be A Pirate? Join the Sea Shepherd Campaign

Want To Be A Pirate? Join the Sea Shepherd Campaign Pesticides, dead animals, broken buildings, nets, fencing and of course, the ever-polluting plastic, are being washed out to sea as a result of the northern NSW and Queensland floods.

The Sea Shepherd Marine Debris clean-up crew is doing something about it.

Sea Shepherd have sent teams of volunteers onto the beaches of mulgumpin/Moreton Island. Over 5 tonnes of garbage has been removed.

During the clean-up, volunteers saw styrofoam littered across the length of the coastline with the majority of this coming from damaged pontoons. When left in the marine environment, styrofoam is estimated to take over 500 years to break down. 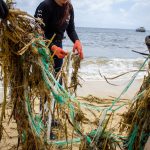 The Sea Shepherd crew were shocked to find whole sections of concrete pontoons smashed and washed up on the beaches. This speaks to the incredible force of the floods.

“The sight of the pontoons on the beach left us in awe of the power of nature, and to see a set of concrete stairs which must have weighed easily over a tonne was just staggering. Seeing styrofoam that has broken off from the pontoons and was covering the beach like snow made me realise that we need to work together to come up with new options for these outdated plastic products and better design of all plastic products.”

Yet some of the worst pollution is smaller than a pea.

What’s A Nurdle? Another version of Wordle? Nope, it’s worse.

A nurdle is a small plastic pellet about the size of a lentil. Nurdles are how plastic enters our food chain. Many marine animals mistake them for fish eggs or other food. Over 220 marine species mistakenly ingest plastics. Ingesting them can cause ulceration, or a feeling of fullness that stops the creature eating real food, eventually starving to death. The toxic chemicals leach into the animal’s system, causing illness through poisoning. This is also how plastic poisons humans. Particularly children.

“Nurdles are a way that plastic enters our food chain.”

Sea Shepherd have launched another campaign to ‘Hunt the Nurdle’. You can join the hunt and help clean up. Check out the Sea Shepherd call to action. Start your own plastic campaign by turning your beachcombing into beach cleaning. Don’t walk past plastic, pick it up and send it to recycling.

Thanks to Sea Shepherd for allowing us to repost their images and ideas; and for their ongoing protection of our planet.

To support Sea Shepherd you can purchase merch from our Coastbeat site, volunteer with Sea Shepherd or organise your own waterway clean up.